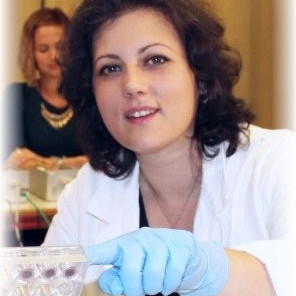 Helena’s professional scientific interest is focusing on the development, validation and implementation of in vitro methods for reduction & replacement of in vivo tests for topical toxicity testing of chemicals, cosmetics, pesticides and medical devices. She has been involved or directly managed international projects aiming at the evaluation and validation of 3D reconstructed human tissue models replacing testing in animals.

Helena completed her PhD thesis on the „ Use of Reconstructed human tissue models in regulatory toxicology“ in 2006 at Freie Universität in Berlin. Her PhD thesis was largely supported by ZEBET at the Federal Institute of Risk Assessment (BfR). After finishing her PhD, she joined MatTek Corporation, USA in 2007 in the position of Senior Scientist and General Acting Manager for EU and since 2009 - 2018 she acted also as Exectutive Director of MatTek In Vitro Life Science Laboratories, located in the EU.

Can we rely on the predictions derived from in vitro reconstructed human tissue models?

Advances in the tissue engineering and other interdisciplinary sciences have led to the increased use of 3D in vitro reconstructed human tissue models (RHTM) in toxicology and pharmacology to predict toxicity as well as efficacy of chemicals and drugs.

Some of the reconstructed tissue models that underwent formal validation were implemented into the regulatory frameworks e.g. as OECD Test Guidelines (TG) 431 and 439 on in vitro skin corrosion and irritation and OECD TG 492 on in vitro eye irritation. The pharmaceutical and medical devices industry also recognise usefulness of the 3D RHTM e.g. for prediction of photototoxicity of topically applied drugs (ICH S10) or for in vitro sub-cutaneous irritation testing of extracts from medical devices (ISO 10993-23).

The progress in the regulatory acceptance of 3D RHTM was possible only due to the extensive validation projects that lasted in some cases more than 10 years. They aimed into the standardisation of the commercially produced tissues, standardisation of the testing protocols, and also extensive trainings of the participating laboratories. Hight quality of validations and demands for 100% data transparency (from both in vivo as well in vitro studies) contributed to increased trust of the regulators towards these innovative tools in toxicology. Acceptance of “me-too“ methods from catch-up validations into the OECD TGs has also been accelerated significantly. This is due to the fact, that commercially available 3D models are usually highly standardised, their parameters (barrier properties, histology etc.) precisely described and the methods and prediction models are in line with those already implemented into the regulations.

On the other hand, these in vitro products are protected by the Intellectual Property Rights and patents and a standard user is not informed about the details of the production, specifics of the cell strain and components and growth factors added into the culture media. This is why especially pharmaceutical companies and cosmetic industry focusing on efficacy claims prefer to have their own-in house models that allow them to produce results on 3D RHTM  with known composition. Although most of the in vitro 3D tissue models used for the experimental work are excellent, some areas of apparent discord remain between in vitro and in vivo (human/animal) results obtained. This can be linked to the differences in the protein binding, bio-availability, differences in the barrier quality and active transport, but also due to static conditions of the experiments that is still the testing standard in most of the laboratories.

The presentation will review recent developments and acceptance of the in vitro 3D RHTM and will also focus on the use of novel production technologies and complex experimental platforms.